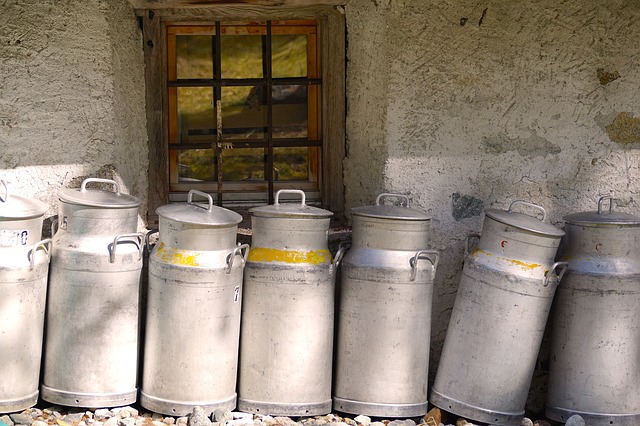 The earliest known milk delivery in the village was by George Dunkerton of Wheelers Farm from around 1900. He was succeeded by his son Fred who transferred the business to Sweephurst Farm around the time of the Great War where he continued his business, including the milk deliveries, as before. The farm milked its herd of around 45 cows by hand in milking stalls in the barn alongside the farmhouse.

Sweephurst Farm Dairy ran a milk delivery service to the whole village every day. The milk roundsman pushed a three-wheeled hand cart (called a milk pram) around the village. It carried a large, usually 17 gallon, churn of milk from which the roundsman occasionally decanted two gallons of milk into a can which he then carried by hand to individual houses on his round. At each house, he used pint and half-pint measuring jugs to measure the milk into customers’ own containers. It should be noted that the milk was full cream and unpasteurised, quite different from the milk sold today which is almost always pasteurised and, most commonly, semi-skimmed.

This method of transport continued until a Morris Cowley car was acquired in the early 1930’s; two 17 gallon churns were carried on its dicky seat from which the milk was decanted as before. In 1938, the farm was taken over by Maurice Carter, Fred’s son-in-law. The deliveries were later made by an Austin 8 van.

Of course, not everyone had their milk delivered; some people still collected their milk from local farms as late as the 1930s, but this was becoming unusual, though going back to the nineteenth century, milk deliveries only really existed in large towns and industrial areas.

Around 1947, the introduction of tuberculosis testing of cows and milk pasteurisation required new dairy equipment. The barn was unsuitable for this purpose and this resulted in the transfer of the cows to Harsfold Farm where such equipment, including bottling, had been installed. Only TB-free cows went to the new location.

The milk was bottled in quart, pint and half-pint heavy glass bottles with 44mm diameter necks and foil tops. Around this time, the milk roundsman, Dewey McDonald, was remembered by many for being a real character.

Sweephurst Farm continued the delivery business, but with bottled milk, until 1960, when the tenancy of Harsfold Farm was given up. The milk delivery service was taken over by Loxwood Dairy although Petworth Dairy also delivered in the village during the 1960s.

Sweephurst was the only local farm that had been running a delivery service. The other dairying farms sold their milk to major dairy companies, usually Express Dairies. Sweephurst Farm also sold milk to Express Dairies if they had a surplus. Interestingly, the number of local dairy farms has declined considerably from around 20 in the 1950s to just two today, viz. Montague and Burchetts Farms.

I was intending to conclude this article this month, but, out of the blue, Jeff Herridge told me that he’d been a milkman in the 1950s and asked “would you like me to write something about the dairy and my work there?” Yes please! So . . . . . .

“Maurice Carter, the proprietor of Sweephurst Farm Dairy was a producer and retailer. I remember the Austin 8 van, registration number FPO122 that was the first van to be used for milk deliveries in bulk, i.e. in 17 gallon churns. (This was after use of the hand cart ceased.) However when the dairy at Harsfold Farm came into being, the 8hp van was found to be too small to carry milk bottles. The dairy complex at Harsfold was the cutting edge of modern technology. The TT attested herd was milked by an Alfa Laval milking plant, driven by an electrically operated vacuum pump, with a ‘D’ type Lister petrol engine as a back-up, should the mains electricity supply fail. All this in a purpose built cowshed with the dairy unit attached.

“Outside the dairy was a coke fired boiler to supply the constant flow of hot water needed. Inside the dairy was a walk in refrigerator to hold all the milk products, both bottled and in churns and also cartons of cream. There was a pasteurising plant for the non-tuberculosis-tested milk. The bottles and crates went through a bottle washing machine then both crates and bottles went into a steam sterilising chest. Also inside the dairy was a cream separator, the skimmed milk was fed to the pigs.

“The cream was sold in 5oz. and 10oz. containers. The bottling plant catered for four sizes of bottle, viz. quart, pint, and half-pint and also third-pint bottles for the Wisborough Green school contract. They were sealed with a cardboard top that had a perforation through which a straw could be pushed. There was a Mickey Mouse logo on the ‘thirds’ and this verse (if my memory serves me right), “This is the way to work and play, drink lots of milk with Mickey each day”.

“The Austin van had been replaced by an Austin 10 van driven by Dewey MacDonald, who used his summer evenings to good effect by mowing the village green with a Dennis mower. The village was growing in the early 1950s, the milk round was expanding and another Austin 10 van HPX585 was purchased, driven by Stan Mewett. Both vans carried eggs, cream, cheese and butter as well as milk. Because the vans were out seven days a week, there was an Austin 12/6, about 1933, with a three speed crash gearbox for use when the Austin 10s were off the road for essential servicing. I was at that time employed as a general farm worker, tractor driving, working the spare horse to go around the farm with a cart cutting produce, e.g. kale, taking feed to cows, collecting dung, etc, thatcher’s mate, digging ditches, etc. I became the relief driver for Stan Mewett’s round. We worked in pounds, shillings and pence. With milk prices 9½d a pint for TT, 7½d a pint for pasteurised and 4¾d a half-pint, we carried 12 farthings in the change.

“When Dewey MacDonald retired in 1956, I took over his milk round. I used an Austin 10 van JPB502. Knowing, as I did, both milk rounds, most people in the parish (and indeed in Loxwood too) became known to me. I held this position until early 1959 when I had a change of employment.”

Sweephurst Dairy’s rounds were largely taken over by Loxwood Dairy who delivered milk around the village by electric milk floats. The company was eventually absorbed into Five Oaks Dairy that operated from premises just north of Little Chef near Five Oaks. This dairy was itself taken over by Sussex Dairies of Littlehampton who continued to operate from the same premises. Sussex Dairies used bottles of the same height, but with a narrower neck of 38mm diameter that had curved red writing that read “Sussex Dairies. The cream of Sussex milk.” Later on, the bottles became less distinctive as the message became embossed instead of being printed.

Coming closer to the present day, Sussex Dairies continued to deliver milk daily, except Sundays, using a diesel milk float. The bottles were stored in tall red plastic crates each holding 20 bottles. These bottles of milk were also sold in Wisborough Green Stores where there was always an empty crate outside the shop door for empties.

Sussex Dairies was taken over by Unigate in 1992. This dairy supplied milk in the now familiar short dumpy one pint glass bottles (known as ‘pinties’) that were stored in orange plastic crates. These bottles have a slight waist to them that is meant to make them easier to handle, but they could still slip out of one’s hand if wet!

Unigate was taken over by Dairy Crest (the commercial arm of the Milk Marketing Board) around 2000. They also used dumpy glass bottles, but delivered in bright green crates. They closed the Five Oaks depot and delivered milk from their depot at the Terminus Road Industrial Estate in Chichester. After being empty for four years, the premises at Five Oaks became a depot for rail industry motor vehicles in 2004.

Milk deliveries to houses in Wisborough Green continued by Dairy Crest, though on alternate days only and never on sundays. In addition to milk, the service also provides bread, fruit juices and other perishable foods. In 2005, quite incredibly, there were three separate deliveries rounds in the village. The first came from Loxwood direction and delivered to Billingshurst Road, Butts Works and Petworth Road on Mondays, Wednesdays and Fridays at around 4.15am thereafter going to Petworth.

On Tuesdays, Thursdays and Saturdays, the second delivery round was at 4.20am to Wyatt House and Butts Meadow which then continued on to Petworth. The third delivery was on the same days at 4.45am to School Road whereafter the float continued to Northchapel. Both of these deliveries come direct from the depot in Chichester.

Since then, the rounds have been rationalised and there’s just one delivery round that comes on Monday, Wednesday and Fridays that serves the entire village starting at Newpound around 4 am and leaving the village for Kirdford at around 5.30 am.