The Napoleonic War and the Threat of an Invasion 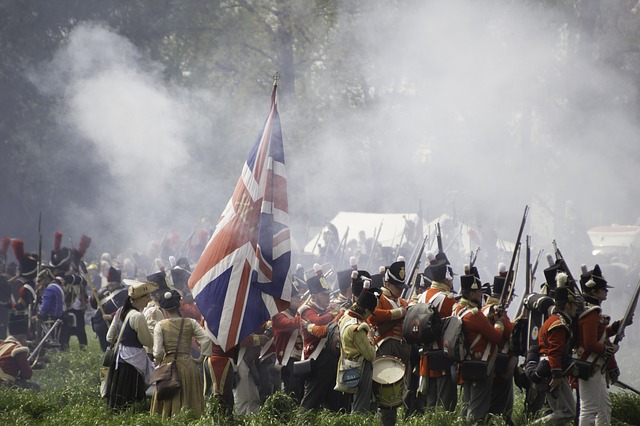 The Napoleonic War between Britain and France lasted from 1803 to 1815. However, Britain was becoming wary of France following its revolution and by 1790 an invasion was considered a real possibility. A naval invasion was by far the most practical method, yet, thanks to Britain’s naval supremacy, this was still considered unlikely. To quote Admiral Jervis’s statement to the House of Lords “I do not say, my Lords, that the French will not come. I say only they will not come by sea”. Other methods that were regarded by the popular press as possible included a secretly dug channel tunnel and a mass balloon armada.

A flotilla of ships and encampments for the invasion were visible in Boulogne from the south coast, so
Britain remained on high alert. A series of beacon-masts, watch-houses and semaphore telegraphs were completed to speed communications in the event of a landing.

In 1796, defensive plans were prepared. They called for a rigorous “scorched-earth” policy – desolating and emptying a district of population, food-stuffs, livestock and vehicles of all kinds in the event of an invasion. Bridges were to be destroyed and roads torn up.

By 1798. nearly a quarter of a million men comprising regulars and militia plus over a hundred companies of artillery were available to defend the country. Armed associations were formed to carry on partisan warfare. Plans were drawn up to arm the populace despite fears of putting arms in the hands of the disaffected.

In Wisborough Green, these matters were of such real concern that a meeting was held in Petworth in 1798. The following statement resulted from the meeting: “We, his majesty’s Deputy Lieutenants and Justices of the Peace assembled at a sub-division meeting holden this day at the Half Moon Inn, in Petworth in and for the said Rape, do hereby make the following Appointments for the Parish of Wisborough Green in the said Rape; the several persons hereby appointed having been duly recommended to, and approved of by us, for the undermentioned purposes, Viz.

First. We do appoint Thomas Seward & John Evershed to take charge of the Removal of Women and Children, especially of those who from age, infirmity, or other cause may be incapable of removing themselves, and may to be removed when the Country is to be cleared. The said Thos Seward and John Evershed to propose the Carriages to be appropriated for this purpose, and for carrying such Bedding Provisions and Utensils as may be necessary, and to limit the Quantities of each; Also to have the direction of such persons as may be able to remove themselves, as far, as that they shall not interfere with the general Removals.

Second. We do appoint John Elliot & Thomas Elliot Junr to have the inspection care and management of the Live Stock of the said Parish that may be removed.

Third. We do appoint John Sayers & Henry Smart to have the like inspection care and management of the Dead Stock of the said Parish that may be removed. Given under our Hands this twelfth Day of June 1798, Cecil Bishop and Egremont”.

By 1804, the government eased back on its scorched-earth policies for a more limited removal of livestock and wheeled carriages. Rather late in the campaign, 74 Martello towers were built along the coast to counter a now-reduced invasion threat as was the Royal Military Canal across Romney Marsh, but they weren’t completed until after the invasion threat was abandoned following Nelson’s victory at Trafalgar in 1805.

The parole towns had the following notice posted in prominent positions: “Notice is hereby given that all such prisoners of war are permitted to walk or ride on the great turnpike road within the distance of one mile from the extreme parts of the town (not beyond the bounds of the parish) and if they shall exceed such limits or go into any field or cross-road they may be taken up and sent to prison, and a reward of ten shillings will be paid by the agent for the apprehending them, and further such prisoners are to be in their lodgings by 5 o’clock in the winter and 8 in the summer months, and if they stay out later they are liable to be taken up and sent to the agent for such misconduct.” It’s implied that the signs were in English; this may not have been very helpful!

Before any officer was allowed to reside in a parole town he was required to sign a document promising to observe the above, but also “that he will behave himself decently and with due regard to the laws of the kingdom, and that he will not directly or indirectly hold any correspondence with France during his continuance in England”. It is apparent that the officers were regarded as gentlemen and of being of such standing that they could be trusted. The British gave each French officer half a guinea per week for sustenance and they were free to find employment locally if they could whilst on parole.