Wisborough Green Then and Now

There has been a forge and blacksmiths in Wisborough Green for many years.  This is the building to the right of Forge Cottage.

In Kelly’s Directory of 1895 three blacksmiths are listed.  Stan Skinner was the blacksmith from the 1920s until 1949 when Bill King took over.  In a photo in the society’s archives a sign outside the forge says ‘S.A. Skinner shoeing and general smith’.  Stan also had a forge at Burdocks where he worked two days a week.  Graham Wells is the latest occupant at Forge Cottage.

Blacksmiths made and repaired tools, ironmongery and agricultural implements.  They also sometimes worked as farriers and wheelwrights.  A metal disc outside the forge is where cartwheels were placed before the metal rims were fitted. 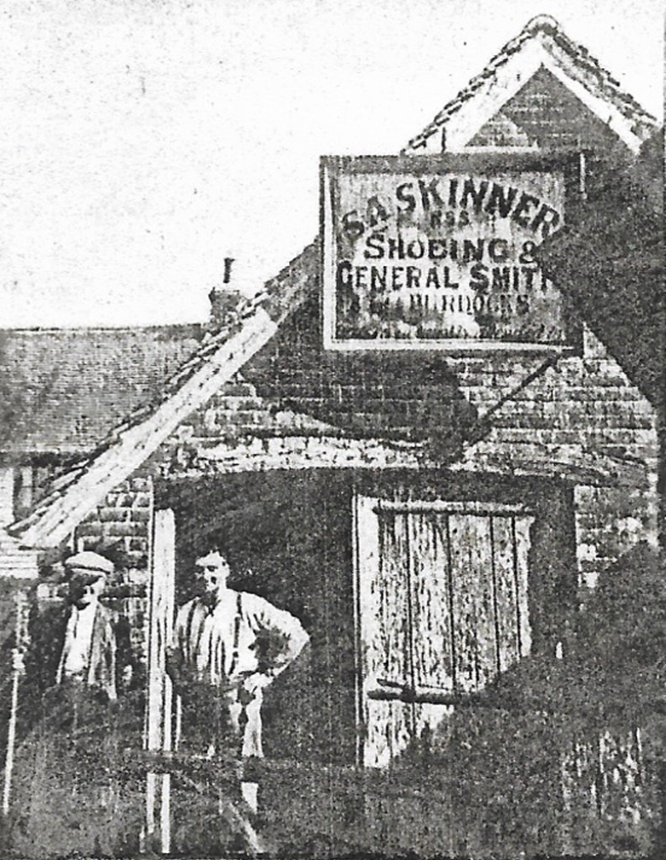 The society has six photographs of the huge bellows which were used to blast air into the fire.  The bellows were removed from the forge and renovated by Ian Champion.  Unfortunately, the whereabouts of the bellows is currently unknown.  If anyone knows where they are, could they please let the society know?

The Village History Society has an extensive archive of photographs, documents and artefacts about the village and some of the characters who lived here.  It meets on the second Tuesday of every month in the Committee Room of the Village Hall.

The Wisborough Green Village History Society was born out of the Wisborough Green Trust and holds the Trust’s records from which this article has been written.  The Society meets on the second Tuesday of every month in the Committee Room of the village hall and is always happy to welcome new members.