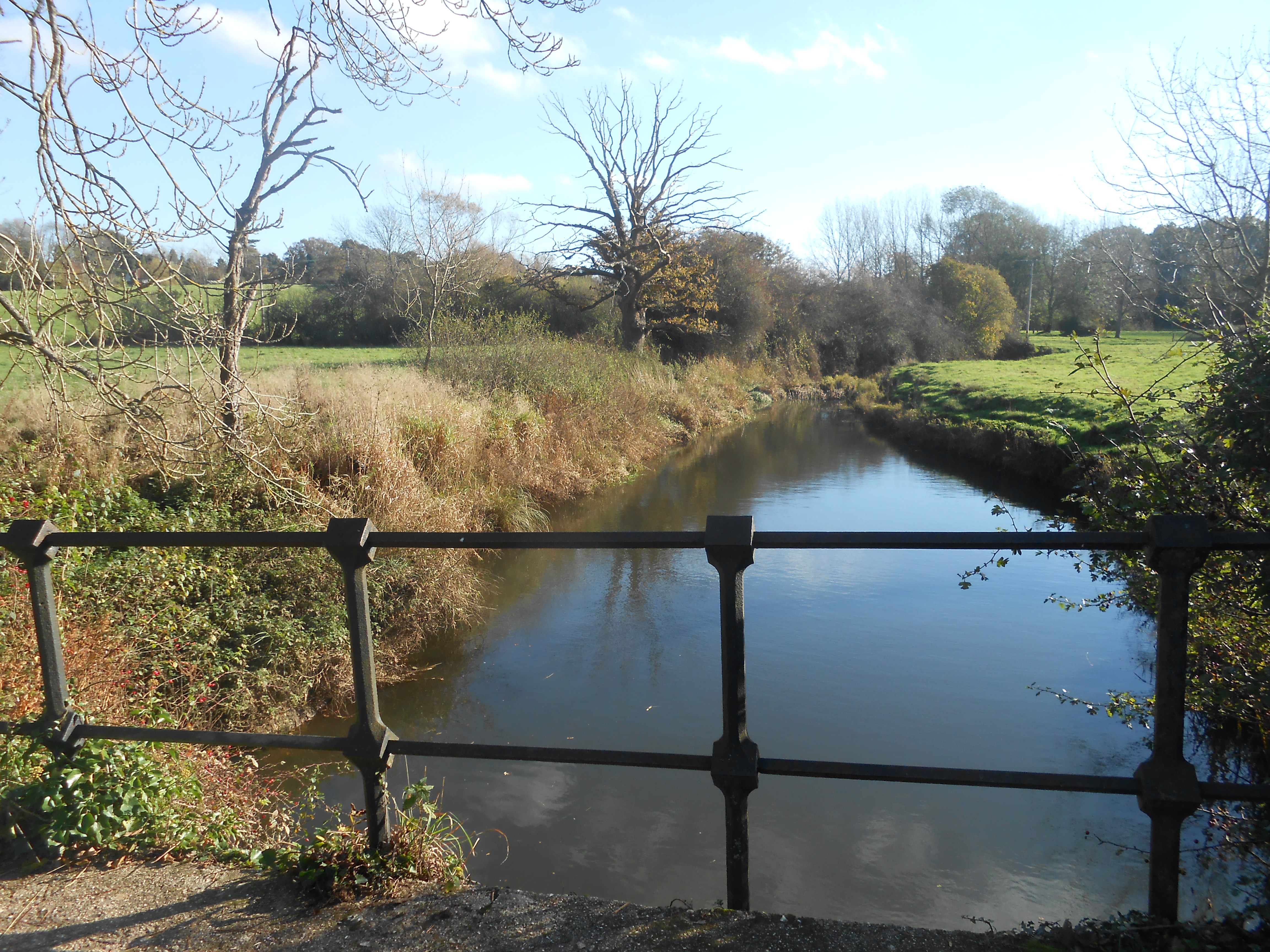 Simmonds Bridge is where Harsfold Lane crosses the Green River. There has been a bridge here for at least four centuries, it being mentioned by the Water Bailiff in 1638, and marked on maps of 1795, 1804 and on the Ordnance Map of 1813. The origin of the name is not known; however, in 1725, it was being referred to as ‘Symons Bridge’, though the modern spelling was in general use a century later.

The present bridge carries a road fourteen feet wide on an embankment and then by a single span of iron girders with iron rails between red brick abutments and end pillars. Until the 1990’s, the iron rails bore a plate with the inscription “John Dence Engineer London 78 Gracechurch Street”, but this has since been stolen. It is interesting to note that the hedging planted alongside this embankment is distinctly different from the other nearby.

The bridge was originally approached by two roads on the village side. One was the continuation of Holy-Water Lane that ran between the Church and the bridge as a stone causeway that went across the main road and alongside Harsfold Lane sloping down to the water’s edge and the site of the earlier bridge. By probing, the line can be traced some six inches below the surface as it went down to the site of the old bridge.

The other road led northwards from the old bridge up the slope through the grounds of The Elms (where road metal has been found), past the windmill and up to the main road in the village.

The road on the south side of the bridge was the original road from Wisborough Green to Bedham, which ran near to where Harsfold House now stands and then turned sharp right via Lowfold to join the present road that goes via Shurlands. A footpath continued straight on from Harsfold Farm and over the Arun by a footbridge below the present brick bridge, but both path and bridge have now gone, though traces of each can be seen.

After the road via Shurlands was made up in 1826, the road by Simmonds Bridge fell into disuse for through traffic until about 1890 when Harsfold House was built and a road provided from Harsfold Farm to Stane Street. 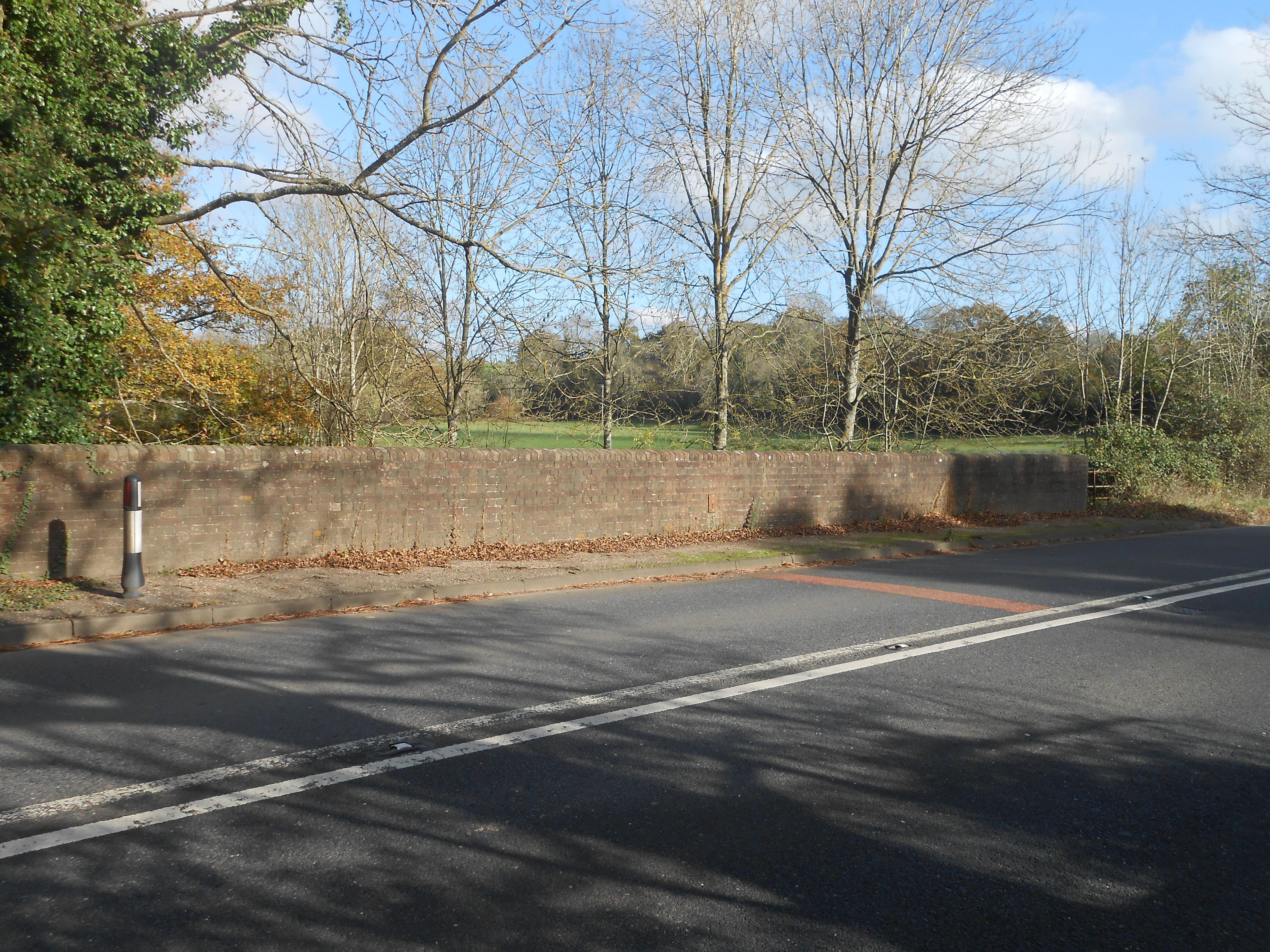 Green Bridge is just west of the village where the A272 Billingshurst to Petworth road crosses the River Kird or Green River. In 1638 it was called Amblehurst Bridge; it has been marked on maps from 1724 onwards.

Under the Statute of Bridges Act passed in 1530, the burden of repair of all public bridges was the responsibility of the County unless it could prove that someone else ought to do it. Certain individuals had the liability of repairing and maintaining bridges, but this ceased if the bridge was totally destroyed or reconstructed in different materials or rebuilt to a different plan or on a different site. Also, an individual was not responsible for any widened part of a bridge. Thus, over time, more and more bridges became repairable by the County, which naturally fought each attempt to add to the bridges for which it was liable. A dispute in this area could only be decided by the rather clumsy method of an indictment of the persons alleged to have neglected their duty in bridge repair followed by their trial at Assizes or Quarter Sessions.

In 1638 the Water Bailiff restated that the bridge ought to be repaired by the above tenants of the two manors. In October 1641, Wisborough Green Bridge (alias Amblehurst Bridge) was reported to Quarter Sessions to be in great decay and the tythings of Hurst(?) and Ashfold were charged with its repair. In January 1659 the Parish was charged with the repair of a “common bridge” at Green Mill, and in January 1715, Quarter Sessions ordered the Parish Overseer to pay the charges which the Rape had incurred on indictment for not repairing Green Bridge.

According to the proofs in the Counsel’s Briefs at the trial in 1805, it was recorded that in 1764, Henry and John Chapman helped to build a new bridge with timber supplied by the lords of the two manors. In 1781, Daniel Tribe (a local contractor and builder) repaired the Duke of Norfolk’s side of the bridge (i.e. the Bury Manor side) at the expense of Beedles Manor and in 1797, the duke was indicted but acquitted – presumably because his tenants were not joined as co-accused. In September 1798, the parish was indicted, but the case was dropped and the parish formally acquitted the following month. The bridge was then repaired by subscription. Finally, in March 1799, Wisborough Green Parish paid their attorney £18 9s 2d “for the indictment of Green Bridge”.

So, that’s 160 years to get a bridge repaired! There’s no record of how people managed to cross the river during that time; perhaps there was enough of the structure remaining to enable a precarious crossing.

Lord Selsey, a considerable land owner in West Sussex and other tenants of the Manors were indicted in 1802, but the indictment was quashed for irregularity. Tenants Johnson and Napper were acquitted in 1804 as there was no evidence to go to the jury in the absence of the lords of the two manors and twelve of their tenants.

The Bishop of Chichester which owned the manors of Amberley, dropped out at an earlier stage as by mistake he was described as lord of the manor, not of Amberley but of “Ashfold”, which was a Tything. The Indictment eventually proceeded only against the Duke of Norfolk and Edward Napper, a tenant. This was because objections to the absence of other parties was apparently waived by consent, It was tried at Croydon Assizes in August 1805 by order of the King’s Bench so as to ensure an impartial jury. But the jury acquitted the accused.

After this, the Rape of Arundel, not being able to throw the burden on to anyone else, had to do the repairs themselves. In January 1807, they were indicted for non-repair of “Wisborough Green Bridge” and having no defence, in June 1807 Quarter Sessions contracted William Wooldridge and his son of the same name to repair the bridge for the sum of £294. In January 1808, the Rape paid £37 to Wooldridge and £80 to Daniel Tribe for work done here, and a rate was levied on the Rape for further repairs during the next few years. The older bridges were of timber; the 1801 and 1804 Indictments each call it “Green Bridge erected and built with Timber and certain other materials”. The 1807 Bridge, however was a single brick arch similar in style to those of the present bridge.

The Bridge was so damaged by the floods of 1852 as to necessitate the erection of a new one. A temporary wooden bridge was built by James Wakeford for £65 around November 1852 under the direction of May Upton, the County Surveyor, and was opened for traffic in December. In January 1853, James Wakeford’s tender for a permanent bridge at a cost of £335 was accepted. This was a substantial one of two low red brick arches of 15 feet 4 inches span with solid brick parapets and white stone cap, and a rounded brick cutwater on the upside of the pier as far as the parapet foot so as to split the water flow. This can still be seen.

In 1926 all the brickwork above the arches was rebuilt and reinforced by concrete and the roadway widened to 17’ by extending the downstream side. The parapets were rebuilt in brick and the old white stone cap replaced. At the same time, the approaches to the bridge were raised to the height of the bridge’s road surface, thus removing the hump that was there before. However, the frontage of Green Bridge Cottage is now well below the present road, thus illustrating just how much the original road was raised.