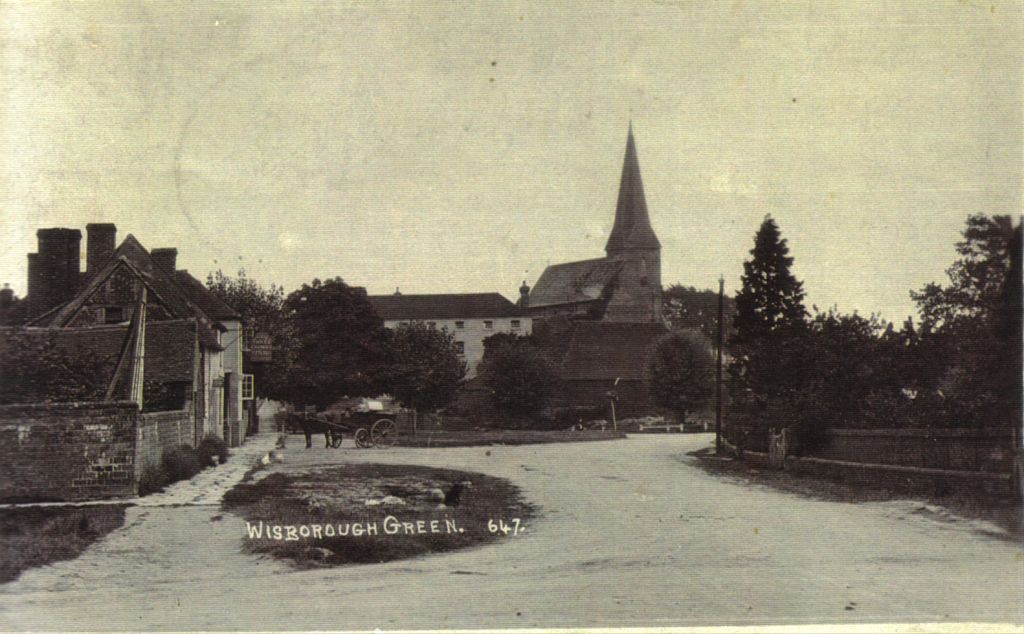 A rather worn handwritten notebook has recently come into our possession after being discovered in the vicarage attic by Rev Simon Newham who was vicar from 2005 (?) to 2010. At first sight – and probably a few more – it would be dismissed as being rather uninteresting.

The book is a log of the weather every day from 1st September 1847 to 18th June the following year. The first entry is a typical example. It reads; “Morning 6 o’clock Wind South West. Morning fair. 3 o’clock fine Rain afternoon, 6 o’clock PM fair.”. It is a little larger than A5 size with plain pages hand ruled in pencil. The entries are very elegantly written in the style of the period, though this means that they are sometimes almost indecipherable. Inside the cover is a later pencil entry in a different hand that reads “by Bray Williams, Who was Parish Clerk 1832 to —-“. I take this to be the comment of a village historian who also made pencil marks against interesting entries where they refer to other events of the time, e.g. “Fox Hounds met at Lee Farm to day” is appended to the entry for 4th November 1847.

We could try and discover who the historian was – we know of at least four in the last 90 years – but there is little doubt that the book was written by Bray Williams. Initially we had no details of his identity but members of our group investigated and discovered that he was the governor of the workhouse from the early 1830s until his death in 1851. Confirmation of his role as governor can be seen in the censuses of 1841 and 1851.

He was born in the village in 1785 and married Elizabeth in 1809 who became the workhouse matron. Their gravestone, with those of some of their children, can be seen at the top of the main path into the churchyard.

In 1835, around the time of Bray’s appointment, the workhouse became part of the newly formed Petworth Union. This continued to make use of the three former parish workhouses in its area, viz. Petworth, Kirdford and Wisborough Green but divided the paupers according to their age. Thus the Wisborough Green workhouse became the home for children, Petworth for able bodied adults and Kirdford for the old and infirm.

The workhouse’s capacity at that time was 200 inmates, having been enlarged in 1797 by the addition of a south wing. However, the workhouse was never full; in 1851 there were 67 inmates and only 25 in 1881. Most of the south wing was demolished in 1955 as unsafe; the only surviving part is the first floor maisonette.

Before the south wing was built, the workhouse was only in the part that is now the village hall. It had a capacity of just 80 inmates of all ages segregated by gender. They occupied two storeys, the first floor of which was removed in 1956 when the building was converted to become the current village hall. Interestingly, of all the workhouses in the district, Wisborough’s housed more than any other. Petworth housed 70 and Billingshurst only 45.

The main hall is the oldest part of the workhouse. The gents’ toilet and kitchen were built later and were used as the washroom and the master’s room. Parish papers of 1778 record that Thos. Tribe was paid £23-2s for building the ‘Newhouse’; this probably refers to the above rooms. They were built next to a well; in November 1778, £5-5s was paid for digging the well, though this cannot have been the first well dug. It was located in the left corner of the main entrance hall and can be identified by a metal plate covering the well shaft. There are some in the village who remember the well in situ, though out of use, in the 1940s. It had a framework with winding mechanism operated by a large wheel that was used to wind up the bucket. The rooms further to the west (e.g. the Vine Room) are built of brick and were constructed later.

The workhouse was originally known as the poor house, but this changed as a result of the Poor Law Amendment Act of 1834 which introduced a rigorously implemented, centrally enforced, standard system that was to be imposed on all workhouses and funded from the local poor rate collected by the parish council. It required Poor Law Unions to be established to administer the workhouses, each under the control of a master or matron. It required the able-bodied paupers to do unpaid work in return for food and accommodation. This was in contrast to the poor house situation where little or no work was required of the inmates. The Petworth Union mentioned last month was established locally to satisfy the act’s requirements.

The earliest recorded governor or master in Wisborough Green was John Slaterford who was appointed in 1737. This is also the earliest verifiable reference to the building that we have discovered so far. In 1738 Henry Smart, a yeoman, was appointed for a salary of £95 pa, but the cost of running the poorhouse in that year is not known. However, a few years later, the council paid £10 pa for fuel and 2/- per head pw for the inmates.

Returning to Bray Williams, the precise date of his appointment as governor is not known. It was probably upon the creation of the Petworth Union in 1835. We know that he visited the workhouse in January 1830 as Guardian, that he was Parish Clerk in November 1833 and that by 1841 he was in office, but for the moment we cannot be sure. Another visit to the Record Office!!?

A pattern in the way the weather is described in the book is evident after the first few entries, i.e. at roughly three hourly intervals throughout the day, so to reproduce even a month in full would be rather tedious. Thus I have included just a selection particularly those where there is a historical local note included, viz.:

9th. 6 Clock Rain Heavy rain at times till 9 clock then Cloudy, Wind SW.12 Sun Shone a little, New Moon this Morning 7 minutes past 9. Eclipse in the Sun such as have not been for 83 years the Almanack says, but though it being very Cloudy it could not be seen but it seemed very Dark about 7 & 8 Clock, 7 Clock rain Evening, 10 the Same, Wind South and Remained their (sic) all night, Sometimes Rain.

18th January 1848. 6 Clock Dry Morning. Frosty some Clouds about. Been a little snow last night, but melted as fast as it came. Bedham Hill and Petworth Park White . . . .

Thereafter the entries become more routine until the end of the book without anything of particular interest. The last entry is for 18th June 1848. Reading the book is a little difficult as, in the style of the time, many ordinary nouns start with a capital and there’s very little punctuation; this is in addition to a very tight and ornate script.

An interesting point is that he was certainly up and about by 6am every day. This was no doubt connected with him being workhouse governor where the working day was closer to the hours of daylight than is usual today.

There’re several references to fairs all during November. It would imply that each locality had several fairs during the year; certainly ‘fair’ referred to trading events rather then the modern idea of a funfair; can anyone cast any light on this or the events please?

I’m curious how the book has survived. As it is complete with copious entries on every page such that no space has been left for any further entries, no matter how small, (the writer didn’t give up with the thought “why did I start this – I can’t be bothered to complete the book”), I can only assume that there were both earlier and later volumes. There’s no introduction that I would have expected with a first volume and no indications of it being an unfinished work. Yet no other volumes seem to have survived; so why this one? Perhaps others were lent to a historian many years ago and they have been mislaid?

Finally, reading this book brings to life in just a small way what went on in the village 160 years ago (this was written in 2010). And being hand-written, it gives character to someone who is otherwise just another name in the village archives.