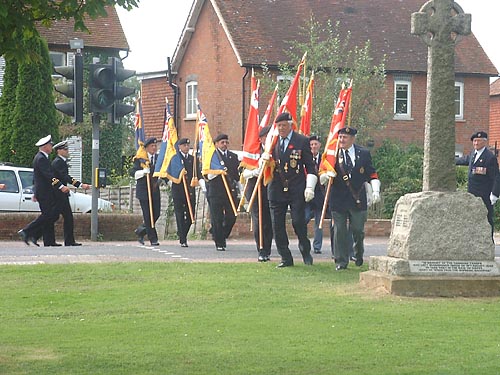 In the summer of 2002, Wisborough Green hosted the Memorial Service in commemoration of the 60th Anniversary of the Dieppe Raid 19th August 1942.

Visitors and residents watched an impressive flypast by the Battle of Britain Memorial Flight. A Spitfire, a Hurricane and a Lancaster bomber flew over the Village Green in tight formation, bringing memories to the former servicemen and their familes.

Many dignitaries and senior members of the armed forces attended the memorial service and wreath laying.

During the second world war, Canadian troops were stationed in and around Wisborough Green. For the many who died in the ill-fated Dieppe raid, our village was the last home they had.

Over many years, the Dieppe service has been an opportunity both to honour the the memory of those who lost their lives in the action, the great majority of whom were Canadian soldiers, and to consolidate the bond of friendship that exists between ourselves and members of the Canadian Veterans Association UK.

The headquarters for Operation Jubilee was located at Hawkhurst Court, near Wisborough Green where a service of commemoration, attended by Canadian veterans and families, has been held annually for many years.
The assault by seaborne forces on Dieppe on 19th August 1942 was a rehearsal for the Second Front. It was commanded by Captain J. Hughes-Hallett aboard HMS Calpe and Major General J.H. Roberts (Canadian Division). Operation Jubilee was mounted specially to give battle experience to Canadian troops and to test techniques and weaponry.

4,961 Canadian plus 1,057 Commandos and some US Rangers were committed to the operation. Commando units comprised 40 Commando Royal Marines, 3 and 4 Commandos British Army – forerunners of the SAS. 237 naval vessels and 67 squadrons of aircraft were also employed in the battle.

Fighting was fierce and casualties were very heavy. 3,363 Canadians (67%) and 607 Commandos became casualties. The destroyer Berkley was sunk, 33 landing-craft and 106 British aircraft were lost. German forces lost 48 aircraft and suffered only 600 casualties from all services.

19th August is a memorable date for Canadian Forces, 40 Commando Royal Marines, and XIII Squadron RAF. Many important lessons were learned and probably thousands of lives saved in future operations such as Normandy two years later by the sacrifice made at Dieppe.

This date is commemorated every year in Wisborough Green with a church service and wreath laying at the war memorial on the nearest Sunday.