The Killing of Sparrows 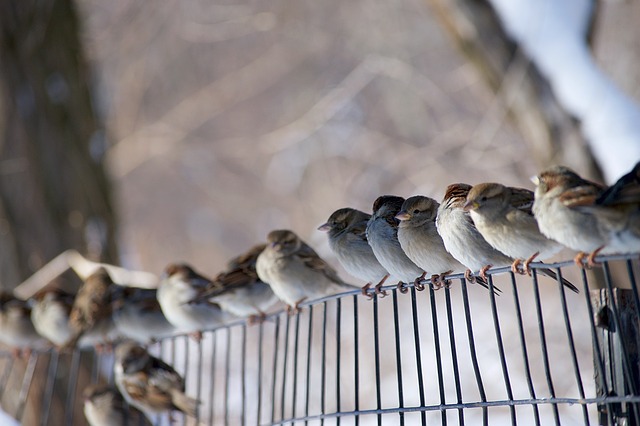 The house sparrow originated in the Middle East and it spread along with agriculture to most of Eurasia, and North Africa. Since the mid-19th century, it has spread through much of the world, often due to deliberate introductions when it has become highly successful. This is due to its early adaptation to living with humans and its adaptability to a wide range of conditions. In many parts of the world it has become a pest and a threat to many native bird species.

From the mid-18th century, most parishes had sparrow clubs with the sole objective to destroy as many sparrows as possible because they devoured so much of the grain being grown. Bounties were paid for sparrows until the late 19th century, when it was accepted that the control measures did not work.

In the 1950s in China, there was a campaign to kill sparrows because they ate grain seeds, causing disruption to agriculture. It was decided that peasants should intimidate the birds to make them fly away in fear. Sparrow nests were torn down, eggs were broken, and nestlings were killed. Initially, the campaign did improve the harvest. By 1960 it was found that sparrows ate insects more than seeds so the campaign against sparrows ended. By this time, however, it was too late. With no sparrows to eat them, locust populations ballooned, swarming the country and compounding the problems already caused by the Great Leap Forward and adverse weather conditions, leading to the Great Chinese Famine around 1960 in which around 30 million people died of starvation.

In Wisborough Green, the parish paid people to kill sparrows. There’s not much information to go on, other than the rates for killing and some of the payments made. The earliest recorded payment was in 1772 to Mr Chasmore, an overseer, who was paid 6s for sparrow heads. From 1793 until 1819 at least, the rate was 3d per dozen heads. Between 1819 and 1823, the parish paid £3.10s.4½ for sparrow heads, though it is impossible to give the number killed as later information showed that 6d per dozen was sometimes paid for old sparrows. I assume that the criterion for payment being ‘heads’ referred to sparrow corpses rather than just the birds’ heads.

On 18th June 1826, it was agreed “that one Halfpenny be paid for the Head of each Old Sparrow and one Farthing for each young sparrow killed in this Parish from and after this day if delivered to the Churchwardens”. Payments continued until 1851 when the entries ceased, the final payments being 6d to J Mitchell on 27th November for ‘2 Doz of Sparrows at ¼d per head’ and on 17th December 1851 when 7s 3d was paid to J. Rugman for ‘10 Doz of Sparrows at ¼d per head’ If the information is correct, then Mr Rugman was considerably overpaid!

The house sparrow population peaked in Britain in the early 1970s and has declined by 68% overall and over 90% in urban areas while the sparrow has almost disappeared from the centre of London. There’re several reasons for the population decrease, but the main one is a fall in insect numbers probably due to changes in agricultural and gardening practices. This particularly affects breeding as the fledglings require a diet rich in insect food.