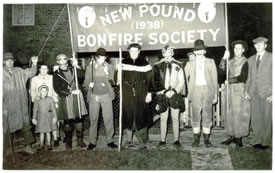 Bonfire societies have been quite common in Sussex over the years and many still operate today. Among those societies that have ceased is the Newpound Bonfire Society.

It was founded in 1938 and based at the Bat and Ball, Newpound. It was traditionally held on 5th November to commemorate the Gunpowder Plot led by Guy Fawkes to blow up the Houses of Parliament and with it King James, his wife and eldest son in 1605. The members were known colloquially as the Newpound Bonfire Boys.

The festivities took the form of a torch light procession after dark led by a band and people in fancy dress up and down the B2133 at Newpound Common and Newpound Lane, as far as Jay’s Barn. Latterly they went to the Three Crowns in the village centre. An effigy of Guy Fawkes was also paraded. A collection was usually taken for charity.

A report in the West Sussex Gazette for 14th November 1946 noted: “Fancy-dresses were judged at the Bat and Ball from 6pm onwards and at about 7.30 the procession started. Led by an Admiral carrying a lighted torch in each hand and headed by Billingshurst and Dunsfold bands, it consisted of a number of torch bearers and villagers together with visitors from nearby bonfire societies and Billingshurst A F S. The route taken was around Newpound and it was very pretty to see the lights bobbing backwards and forwards. Then they went down to Wisborough Green and back to Newpound and the bonfire.”

The marchers carried flaming torches made with green hazel sticks about 4’ long with coarse hemp wrapped and wired on one end and soaked in paraffin. Around 130 torches were made.

The procession proceeded to a large bonfire in the field in front of the Bat and Ball, though in earlier year it had been in the field where Arun Service Centre (ex-Sizzey’s Garage) now stands, i.e. on the other side of the B2133 a little north of the junction. The effigy of Guy Fawkes (viz. The Guy) was then placed on the top of the bonfire. A member of the society would then climb a ladder to the top of the fire and read the Bonfire Prayer. The crowd would repeat each line:

Remember, Remember, the Fifth of November
Gunpowder Treason and Plot
Guy Fawkes, Guy Fawkes, it was his intent
To blow up the King and Parliament
And I see no reason
Should ever be forgot.
Three score barrels of powder below
Poor old England to overthrow.
But by God’s providence he was catched
With a dark lantern and trimming match
Holler boys, holler boys, ring boys, ring
God save the King.

The fire was then lit by the burning torches being thrown at it.

Generally a firework display would follow and later everyone would enjoy hot buttered baked potatoes.

There were no celebrations during the war years 1939 to 1944. It is believed that the first event after the war was in 1945. As most of the Canadian troops were still in camps around the area, the parade was led by a Canadian Scottish pipe band in full ceremonial dress. This was a very colourful sight with the torches and fancy dress. On another occasion, the Dagenham Girl Pipers were engaged to lead the procession and afterwards gave a display in the field where Arun Service Centre is now. This was instead of a firework display. On this occasion, the procession went to the village and the Girls were given refreshments at the Three Crowns.

Generally the Billingshurst Silver band was engaged to play and march in the procession.

Society members held whist drives and dances to provide funds for fireworks and collected material for the fire several weekends before the event. This would be hedge cuttings from farms or private properties. No mechanical machines then to mulch them up! Farm tractors and trailers were used and Carter Brothers Reliance Works lent their lorries.

Members of the society also attended other neighbouring society’s events in fancy dress.

The society ceased to function some time in the late 1960’s due to lack of members willing to help with the preparation. Several years later, surplus funds in a bank account were used to provide a seat on the village green in memory of Ted Stanbridge who was the landlord of the Bat and Ball and a leading member of the society.

The society’s banner can be seen on display at Fisher’s farm.