In 1912 outside the post office.
Emma Wadey with a female assistant and nine postmen.
She remained postmistress until 1938. 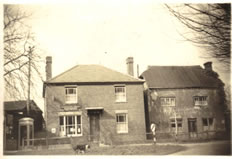 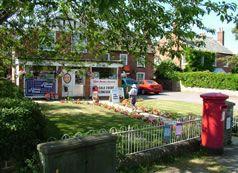 The village has had a post office from 1840. Rather surprisingly, it has operated from six different locations since then.

The first one was where I’m typing this report, namely my home Farthinghoe facing onto the green. The precise date that the service commenced is not known, but it was certainly operating in 1840 – the year of Rowland Hill’s Penny Black. The postmaster was William Ellis and he must have worked horrendously long hours because the mail cart arrived from Horsham at 5.30am and the last post was dispatched there as late at 9 pm.

After William Ellis died in 1874, William Charman, who lived at Green House, became postmaster. The post office was operated from the front room of his home. He was postmaster until 1899 when his daughter Emma Wadey became postmistress there until 1904.

In 1904, Emma Wadey and the post office transferred next door to the house now called White Chestnuts because, it is believed, the county council acquired Green House as it wished to extend the school. The post office was located in the left-hand front room of the house. A post box was built into the wall at the far left front of the house together with an automatic machine for selling ½d and 1d stamps. The site of the post box can still be seen, as it was replaced by a slightly different coloured brick.

The building also contained the village’s first telephone exchange installed in 1907 and positioned next to the counter. At that time, all deliveries were made by bicycle and the postmen’s bikes were kept in a corrugated iron shed to the left of the house. Kelly’s Directory for 1908 states that the post office was open every day from 7 am to 8 pm, except Sunday when the hours were 8 am to 10 am. There were two post deliveries in the village at 7 am and 10.30am, except Sundays which had just one delivery at 7 am. Life was very hard for the workers in those days.

It is perhaps surprising just how many people were employed by the post office in the village.

Horace James became postmaster in the war years and when he retired in 1947, the post office moved to its fourth but temporary location, viz. the old sports pavilion that was demolished in 1971. The postmistress was Wynne Clark. Later that year it was transferred to a large hut in the grounds of The Old School House. She operated the post office from here until she retired in 1960 when it moved to its sixth and final home in the Stores. There has been a series of postmasters here, the most recent being Debbie Self.