Although there is evidence that a ‘fair’ has been held in the village since the 13th Century,  it was certainly not what we know today! It seems that the earliest reference to the present day fair on 20th September is in Dallaways ‘History of Sussex’ published in 1819. It states that two fairs were held annually, one on 16th July and another on 20th September. In those days it’s probably a safe assumption that the term Fair was synonymous with ‘Market’ the definition from Chamber’s Mid-Century Dictionary being ‘Fair: a great periodical market for one kind of merchandise or for the general sales and purchases of a district, with or without amusements, often reduced to a collection of shows, swingboats and similar amusements.’ In ‘The Survey of the Royal Commission on Market Rights and Tolls for 1888’, Wisborough Green is noted as holding a Fair on 20th September and as there is no mention of the 16th July, it had probably been abandoned earlier.

There is a bit of a gap in the history, but it appears that at some point, the Parish Council (established in 1894) took on the management of the fair. In 1970, Mr Trickett and his family took over the responsibility and since then, has organised for the fairground attractions to arrive. The Parish Council agrees to the use of the Green and makes a charge which is used to repair damage to the ground which is inevitable after a wet summer.

Do enjoy the fair and help to keep another wonderful village tradition. 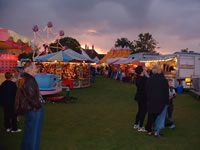