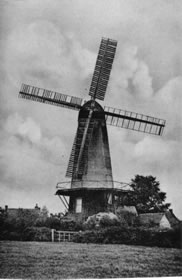 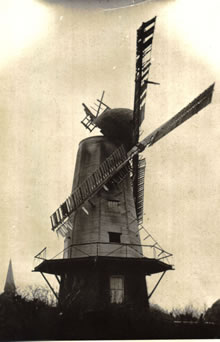 The earliest reference to a windmill in the village is in the will of William Phylippe that was dated 1521. Its location is not known, but the names of two properties on the Petworth Road, Milland Cottage and Milland Villa, imply that there was once a mill nearby.
The only mill surviving in the village is The Old Mill in Mill Lane. It is not known when it was built. The first record of its existence is a notice in the Sussex Weekly Advertiser dated 16th of March 1820 in which it was described as ‘an extraordinary good windmill situate close to the New River’. The ‘New River’ referred to is now known as the Kird.

The mill was of a type known as a smock mill, so called because the mill’s appearance in white tapering weatherboard resembled a nineteenth century farm labourer’s white linen smock.

Externally, the building had three main parts. At the top was a cap that supported the sails enabling them to rotate. The sails, or sweeps as they were known in Sussex, had a diameter of around 70 feet.

The design of sails improved over the years. Later designs, including Wisborough’s mill, had sails with hinged vanes or shutters, like a Venetian blind, that were linked to a spring, the tension of which could be set manually so that the shutters opened and closed according to wind strength. A good rotation speed of the sweeps for grinding was around ten revolutions per minute.

The most important attribute of the cap was its ability to rotate horizontally so that the sails could face the wind. The cap had to be capable of moving round easily in case the wind direction changed suddenly and the sails received the wind from the side or even from behind which could cause considerable damage to the mill. This movement of the cap was performed automatically by means of a fantail at the back that operated rather like a weather vane.

The main part of the mill was the octagonal wooden tower. Its function was to give sufficient height for the sails to clear the ground, to store and drop the grain into the bins and to house the grinding machinery. The rotating of the sails drove a vertical shaft that was connected by gear wheels to three pairs of mill stones. These ground the grain that was dropped into them from the grain bins above. At the bottom of the tower was a gallery, or stage, around which the miller could walk to gain access to the tips of the sails.

The third and lowest part of the windmill was the tall two-storey octagonal sandstone base that supported the wooden tower. Inside the base were bins to receive the flour and to store grain for grinding.

The sandstone that made up the base appears quite old and may have come from an earlier mill that burnt down. Mills suffered from fire as grain became quite warm when being ground and flour dust was inflammable. A spark from a mill stone could cause a fire. Stones from fire damaged windmills were often reused in the construction of new windmills.

In 1860, the mill was described in the Sussex Weekly Advertiser as a ‘Freehold mill in good working condition’.

Towards the end of the nineteenth century the mill had been equipped with two further pairs of mill stones. These were situated in the base and were driven by a stationary steam engine probably located on the hard standing in the garden to the immediate north east of the mill. The garden pond nearby would have been essential to provide a water supply for the steam engine. Engine power was introduced to enable mills to operate when there was little wind.

The working of the mill over the years was uneventful. The mill continued in working order with farmers’ corn being ground into flour. At that time, many people baked their bread in the old brick ovens, some of which survive today, especially in farmhouses. Until the thirties, some thrifty villagers still gleaned the cornfields for ears of corn that had been passed over by the harvesters. These were called gleanings and the gleaners (as they were called) took their grain to the mill to be ground into flour so that they could bake their own bread.

However, in 1910, this all changed. Through neglect or accident, the mill became tail-winded. This meant that the windmill cap didn’t turn to respond to a change in the wind direction and enable the sails to face the new wind direction. The result was that the wind blew the sails from behind. The sails weren’t designed to take this force and the cap and sails were dislodged. A photograph shows the cap and sails assembly only just attached to the tower and hanging at a precarious angle. The sails are in the form of an ‘X’ with the two lower sails wedged against the tower.

The mill owner at the time was Mr Champion, the mill being known as Champion’s Mill. He made a number of attempts to right the cap with men and ropes, sometimes resulting in men being hurled into the air, but without success. It has been suggested that he was able to restore their humour in his position as landlord of The Three Crowns!
The cap and sweeps were eventually taken down six months later and the open smock tower roofed in. For a few years, the mill was used as a local look-out, but by 1915 the woodwork had become dangerous and Mr Baldwin, a local builder, was employed to take the tower down to about half height to make it safe. Over the years, the gallery collapsed and the remaining woodwork and internal staircase became a bit rickety.

Owls used to nest inside and children climbed the stairs to see them, but they had to be wary of the owls particularly when they had chicks. This was one of the reasons why children regarded the mill as a scary place.

The base was used as a store for many years. There was a pigsty at the rear and chickens were kept around the base. It became overgrown and neglected to the extent that it was almost unrecognisable. In 1961 it was rebuilt by Mr Kemp into its present form as The Old Mill and is now, in 2007, the lovely home and garden of Mrs Fairlie.